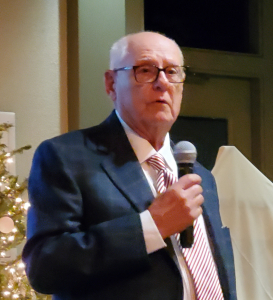 Born in Cleveland, Ohio, Mr. Curk was a lifelong fan of the Cleveland Browns.  He graduated from Benedictine High School, received a degree in Chemical Engineering from the University of Dayton in 1960, and an MBA from Xavier University in 1964.  Mr. Curk was a dedicated supporter of the University of Dayton and the Dayton Flyers athletic teams through the 1850 Society, President’s Club, and as a coach’s corner supporter of the football and bas

Mr. Curk worked for National Cash Register (NCR), rising to Chief Engineer, before starting PSI in 1976.  Mr. Curk led PSI as President and CEO for 42 years, before selling the company to the ownership group of GCF in 2018.

“It is still a shock for all of us in the GCF family of companies that Larry has passed away,” shared Bryan Eovaldi, President of GCF and its related companies. “He had a distinguished career. Larry started PSI in 1976 and built it into one of the leading converters in the thermal receipts industry. We are fortunate to have had the privilege of sharing Larry’s leadership, expertise, work ethic and commitment.  Our thoughts and prayers go out to Larry’s family and friends.”

Mr. Curk is survived by his wife, Nancy, son Craig and daughter Ann, and grandchildren Caren, Dan, Eric and Don.